Port of Gdańsk ranks second in the Baltic Sea 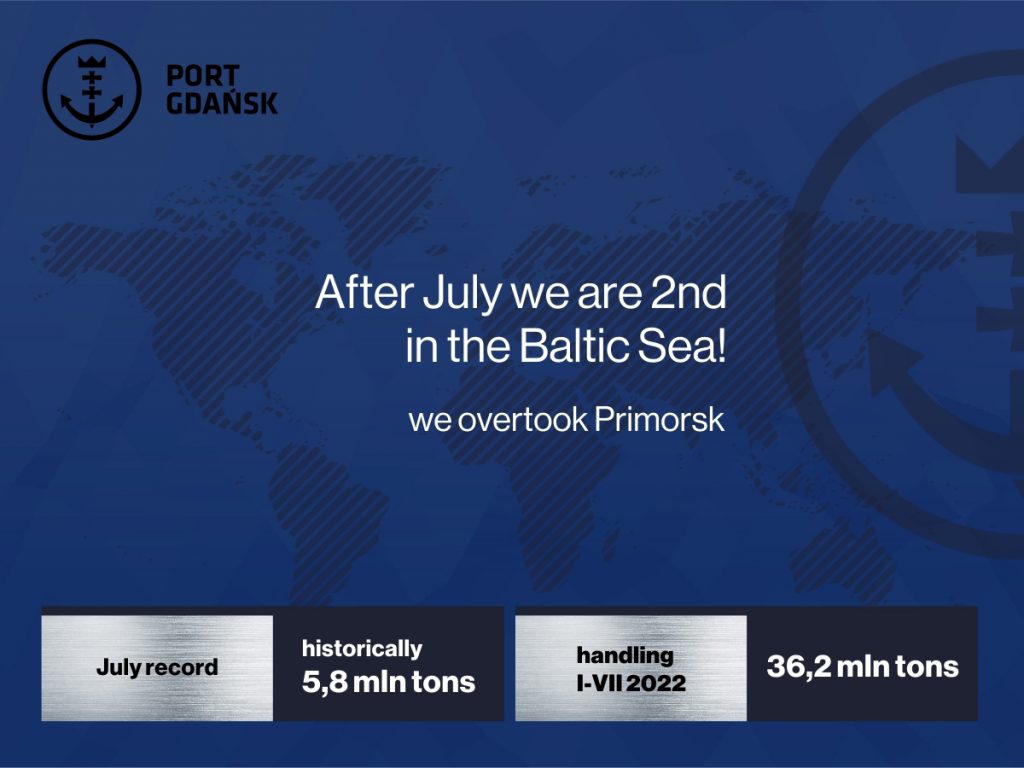 ‘We have surpassed the Russian Port of Primorsk and are currently ranked second in the Baltic in total cargo handled. We also held onto first place in container handling. July was an absolute record-breaker – a historic 5.8 million tonnes per month were handled. We have a good chance of ending the year at over 60 million tonnes’, explains Łukasz Greinke, CEO of the Port of Gdańsk.

From January to the end of July, more than 36 million tonnes of goods were handled in the Port of Gdańsk. This is 20 per cent more than in the same period last year. Almost all cargo groups reported increases. The biggest increase was recorded in timber – by 3,150 per cent. The handling of ores also increased significantly – by 267 per cent. There was an increase in energy raw materials. Coal increased by nearly 67 per cent and liquid fuels by more than 39 per cent. Only other bulk goods (aggregates, sulphur) recorded declines – by 23 per cent. There is a slight adjustment in LCL goods (-0.4 per cent).

After a year of the pandemic, the cruise market crashed. This year brings a positive change. Due to the war in Ukraine, there is more cruise ship traffic in the Baltic ports. This is due to shipowners’ decisions – no passenger vessels are currently entering the Russian port of St Petersburg. The port of Gdańsk estimates that a record number of over 90 cruise ships will arrive by the end of the year, and estimates that it will welcome around 35,000 tourists. By the end of July, it hosted 53 cruise ships, 44 more than in the entire past year.

Ports – strategic for the country

The current growth of port operators is very dynamic, which is why the Port of Gdańsk Authority SA is discussing new projects. Further investments, including the construction of warehousing and storage facilities, are necessary to handle the growing cargo streams, especially of energy raw materials for domestic use and of cereals, iron ore, steel products, and sunflower oil for Ukrainian exports. Thanks to the diversification in cargo groups, as well as the ongoing projects, the port is resilient to market turmoil, which it proves with steadily increasing cargo handling. As an enterprise of strategic importance to the national economy, the port must be flexible and respond quickly to market needs.

The Port of Gdańsk Authority SA is currently carrying out intensive investment and renovation work, which, due to the geopolitical situation, is given priority, as it focuses on preparing new areas for coal storage, and ensuring their full availability to the railway infrastructure. Site hardening has already been completed on an area of 100,000 sq m and major repairs to the track with a total length of 1,367 metres. By October this year, further areas for the storage and handling of coal, covering 81,000 sq m, are to be paved, and a section of 2,072 m of railway track renovated.

Ports are not only the driving force of the national economy in peacetime, but also the guarantor of military, energy, and food security in times of armed conflict, which we are witnessing. Hence the joint initiative of Gaz-System, Port of Gdańsk Authority SA, and the Maritime Office, namely the construction of a floating, FSRU-type LNG regasification terminal. This is a vessel that stores gas in liquid form and has an installation that changes the raw material from liquefied to gaseous form. As part of this project, two berths will be created for the vessels. The state budget has set aside PLN 856 million for this purpose. The construction of the FSRU terminal is a priority for the country’s energy security. This investment will contribute to the diversification of sources of natural gas supply to Poland, and thus to the elimination of dependence on a single supplier of this raw material.

In addition, the Port of Gdańsk, in cooperation with the operator, Port Północny, which handles ore and coal at the ore pier, is seeking permission to build another loading bay for wagons to make the transport of goods out of the port even more efficient. The potential shipping capacity is 7.5 million tonnes of goods per year. Another million in bulk cargo, including coal, can be handled by PGE. This is possible thanks to the modernised Dworzec Drzewny quay, on which the company operates, as well as investments in handling equipment.

Due to increasing oil handling, Naftoport has also decided to expand. An additional berth will be created at the terminal to handle these products.

All these investments are strategic in terms of national security, but also increase the port’s competitiveness and strengthen its position internationally.

The Port of Gdańsk was once again present at the...

Ukrainian Cargo – A form dedicated to Ukrainian companies is...