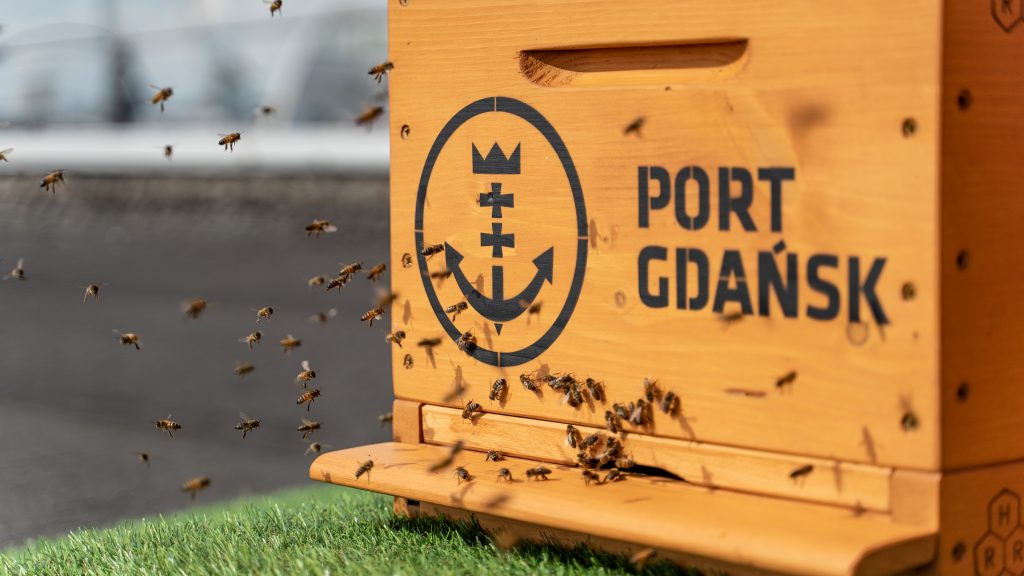 Bees are a tremendously important part of the ecosystem, and their extinction would be an ecological disaster. This is why it comes as no surprise that beehives have been appearing ever more frequently in public spaces, mostly on rooftops. The Port of Gdańsk matches this trend. The first four hives have been installed on the roof of the Westerplatte Ferry Terminal. Each hive houses between thirty and seventy thousand bees. The first honey harvest is due next summer.

Nearly a third of all food consumed by humans requires pollination by insects, primarily bees. Without them, there would be no fruit or vegetables. Unfortunately the existence of these insects is increasingly threatened, and their global population has been declining with each passing year.

“Researchers estimate that after the last bee dies, life on Earth will only be able to continue for a maximum of ten years. We want to save these insects, which is why have created a space for them in our port. We are proud to support various ecological initiatives which serve the planet,” says Port of Gdańsk spokeswoman Anna Drozd.

The hives were installed in the Port of Gdańsk by the Warsaw-based bee-keeping company, Pszczelarium, which has built dozens of apiaries since 2014. Its founders look after honey bees in more than 30 cities. They claim that there are many places in cities where small apiaries could be safely built, provided that they are well managed. Before a hive is installed, the area is first inspected to determine the correct location and the measures necessary to ensure the safety of the apiary. An urban apiary should be fenced off to prevent unwitting passers-by from entering the off-limits zone around the hives. Bees look for food within 2-3 km of the apiary, but if they fail to find it, they can travel up to 8 km.

“We want to raise awareness about the fascinating world of honey bees. This is why we care a great deal about security and avoiding stings and swarming. To achieve this, urban bee-keeping expertise is necessary. It allows us to properly place the hives and ensure that the bees are well looked after,” explains Krzysztof Zdebik, who is responsible for the port hives.

A well-managed apiary has no stinging accidents. After a bee has flown several metres away from the hive, it no longer instinctively defends its home. This is why there is no risk of attacks happening away from the apiary. However, it is important to remember that bees are still living creatures, and even the gentlest bee will sting if accidentally squeezed. This can happen kilometres from the hive.

The soonest honey harvest should take place in the middle of next year. The port bees are expected to annually produce around 60 kg of honey (143 jars). A single hive produces around 15 kg of honey. This begs the question, is honey from urban apiaries good for you? It turns out that actually it is, as bees “filter out” all pollutants when processing the nectar into honey.

“We invite everyone to join in the fun together. A post will soon appear on our Facebook page announcing a contest for the names of the honeys produced by the port bees,” adds Anna Drozd.

Keeping bees in cities is becoming increasingly popular in Europe, with more than 4000 hives installed in Berlin and 5000 in London. Poland has also been following this trend. Warsaw already has around 400 hives, with apiaries built on the roofs of the Palace of Science and Culture and the Grand Theatre, as well as in the green areas surrounding the Chancellery of the Sejm. And what about Gdańsk? One apiary housing five bee families has been built at the gates to the Port of Gdańsk, near the KOGA Office Centre. Another three hives were constructed on the roof of the DCT Gdańsk office building in May of this year.