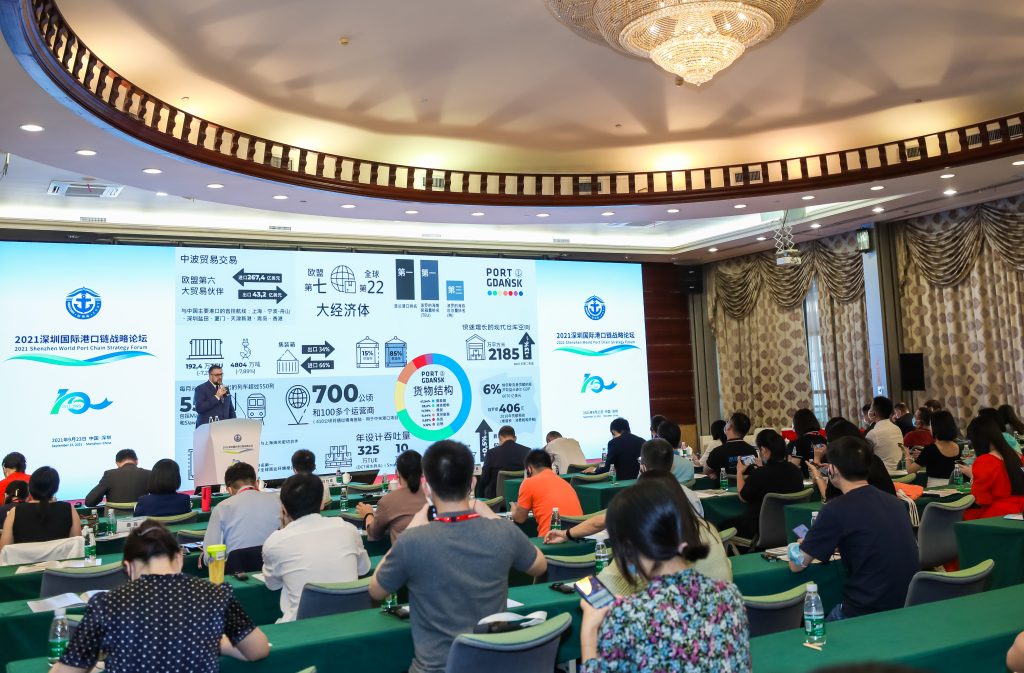 On 23-25 September, the Port of Gdańsk participated in the China (Shenzhen) International Logistics and Supply Chain Fair – CILF 2021. The event was an opportunity to promote both the port and the companies operating from there.

CILF attracts many well-known international companies, presenting and promoting the global impact of the Chinese logistics sector. The Port of Gdańsk, as the fastest growing European port in the last decade, could not avoid attending. Over the past 10 years it has recorded a 76% increase in cargo handling. This proves the good use of the funds allocated for the port’s development and its effective management.

It is a great opportunity to strengthen the position of the Port of Gdańsk in the international arena by attending such fairs and conferences, where it is possible to meet new business partners and establish links with them. The port participates in a dozen or so such events each year. And for several years now it has been very active in Asian markets. In 2018, the Port of Gdańsk opened a trade office in Shanghai, which supports clients and partners in establishing relations with Chinese companies on a daily basis. Representatives of the office are active, for example, at fairs, in organising business meetings and showing that Polish ports can successfully compete in the logistics and transport market with the largest ports in Europe.

CILF is one of the most important events in the logistics and transport sectors in Asia. Every year, the fair attracts around 1,800 exhibitors from more than 50 countries, as well as 130,000 visitors from over 80 regions. In addition to stand presentations, the trade fair also hosts numerous conferences, meetings and discussions devoted to the current issues facing the logistics industry. The talks concern innovation, the ecology of transport and new technologies. The Port of Gdańsk has been participating in these events for many years.

During this year’s fair in Shenzhen, the Port of Gdańsk for the first time organised a seminar “Poland the Logistics Hub of Europe” for over 100 logistics, forwarding, warehousing and e-commerce companies working with Chinese partners in the exchange of goods. The seminar was opened by Sławomir Michalewski, Vice-President of the Port of Gdańsk Authority. He stressed the importance of investments from the perspective of clients. And there have not been such large infrastructure projects in the Port of Gdańsk since the late 1970s. The expansion and modernisation of the road and railway network in the External Port, a project worth PLN 168 million, was completed in June 2021. The modernisation of the infrastructure in the Inner Port, consisting of quays and the fairway, is nearing completion. All these investments are very important for the port’s continuing business. The intention is to increase the competitiveness of the port and its share in Baltic transshipments.

“Together with DCT Gdańsk, we have announced the construction of the new Baltic Hub 3 terminal. A third deep-water quay will be built in the port area, thus increasing the handling capacity of DCT terminal by 1.5 million TEUs, to a total of 4.5 million TEUs per year. Thanks to the continuous development of the infrastructure, more Chinese partners will decide to cooperate with our port. We are observing the development of Chinese ports and we are ready to deepen our participation,” assured the vice-president, Sławomir Michalewski.

The Port of Gdańsk is Asia’s maritime gateway to the markets of Central and Eastern Europe, the most dynamically developing region of the European Union. Within the available ocean lines, only one Baltic port maintains direct container connections with China. It is an ideal market for 100 million consumers, as well as being an important place for manufacturing and constantly growing exports of high-quality products to markets all over the world.

The guests of honour at the seminar were: Consul General of the Republic of Poland in Guangzhou, 1st Customs Counsellor – KAS Representative at the Embassy of the Republic of Poland in Beijing and Directorate of the Shenzhen City Trade Commission, Secretary General of Shenzhen Logistics and Supply Chain Management Association. The seminar was attended by representatives of PAIH, Invest in Pomerania, Allegro, Real Logistics, PKP S.A., Langowski Logistics, Uni-Logistics and Adampol.