“Bird Island” on a breakwater in the Port of Gdańsk: an oasis for terns and black headed-gulls 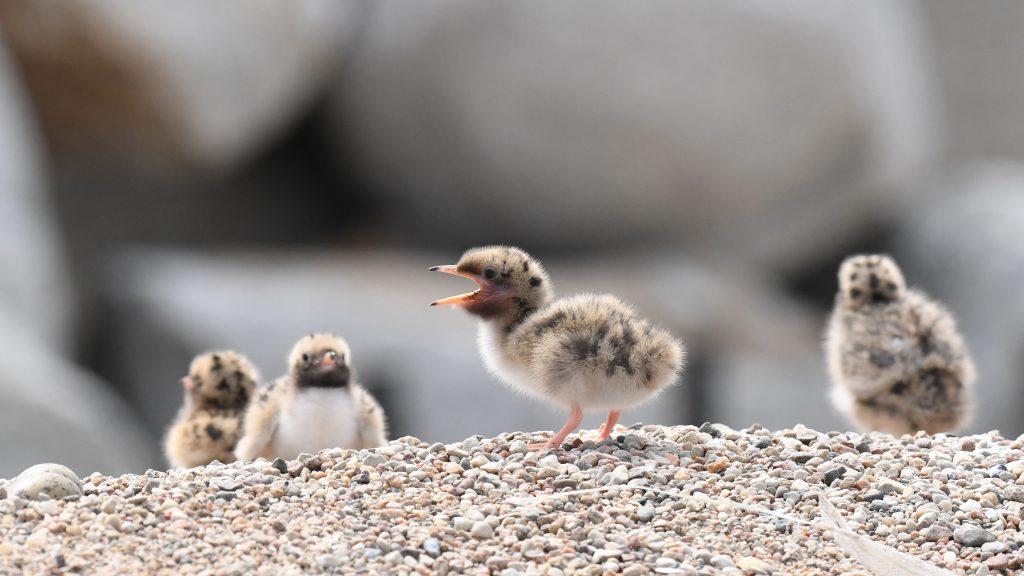 Relocation of a colony of common terns and black headed-gulls to “Bird Island” was completed successfully. The birds have settled down on the eastern breakwater in the North Port, and their young have learnt to fly and left the colony.

Until recently it was the Ore Pier in the North Port that was home to the tern colony. It was created before the breeding season in 2011, as part of an investment to adapt part of the pier for bulk cargo handling. As time passed by, the wooden structures of the platforms on which the birds were nesting suffered gradual damage, until their relocation became necessary. It was, however, no easy task. It required the approval of the Regional Directorate of Environmental Protection for intentional frightening and disturbing of birds nesting on the platforms and the Ore Pier. There was also a risk that the new habitat would not be to their liking. Luckily, this was not the case.

From the pier to the island

‘As soon as there was an opportunity to move the habitat to a safe place, we took it. The Maritime Office in Gdynia was carrying out the project “Modernization of the protective breakwater system in the North Port of Gdańsk”, and we decided to move the colony right there, to the breakwater. “Bird Island” was designed as a target nesting site for birds within the boundaries of the Natura 2000 area – Puck Bay. Its construction was included in the environmental decision for the expansion of the breakwaters as a future habitat for terns,’ says Agnieszka Roszkowska, Environmental Protection specialist for the Port of Gdańsk.

“Bird Island” is a sheltered nesting site covering an area of nearly 2,000 square metres, including a sandy substrate. The area is safe, stable and best imitates the natural nesting conditions of common and sandwich terns in the Baltic. It is situated approximately 2 km from the seashore. In contrast to the platforms on the Ore Pier, this location poses no risk of attack by land-based predators, such as foxes or American minks. Storms also cannot threaten the birds, either during the incubation stage or during the rearing of the nestlings.

‘There were two reasons for creating the new habitat. Firstly, the existing habitat had a number of flaws. The wooden platform structures had deteriorated and were no longer safe for the nestlings of common terns and black-headed gulls. Sandwich terns, on the other hand, were not nesting on the prepared platforms, but in their vicinity. For this reason, all the previous breeding grounds of these birds were destroyed by predators,’ explains Dr. Szymon Bzoma, an ornithologist collaborating on the project with Adam Janczyszyn. ‘The second reason was the obligation to ensure further development opportunities for the Port of Gdańsk, which included the possibility for an overhaul of the Ore Pier and the creation of new ship slots. The pier is over 600 m long and, should its construction be finished, it will allow for simultaneous stationing of 4 bulk carriers. This could translate into a threefold increase in the utility of this infrastructure compared to its current capacity.’

One of the conditions for the birds to settle in the newly built site was to prevent them from nesting in the old one. How was that achieved? By frightening them away by using warning tapes hanging from the platforms and frequent visits to the area by people. Additionally, several ‘scarecrows’ were installed.

In order to encourage the birds to move to the new habitat, the team relied on voice and visual lures. Back in April, several dozen wooden figurines of terns imitating adult nesting birds were placed on ‘Bird Island’. Such figurines are called ‘decoy ducks’ by ornithologists. Terns and gulls respond well to them.

‘For birds, it’s a sign that the nesting site is appealing and that other birds have already settled there. The white paint is supposed to imitate bird droppings. The sounds of a tern colony played from speakers create a sense of security for the birds,’ he added.

Hay and dried reeds were also delivered to the island for the birds to build their nests. Relatively quickly, already by May, the birds had lost interest in the Ore Pier as a breeding site. Instead, they began to arrive on the island with increasing frequency. What is interesting is that the first nests by sandwich terns appeared right next to the figurines.

‘“Bird Island” has became a safe breeding ground for protected bird species. We are overjoyed that terns and black headed-gulls have settled in for good. The number of active tern nests is higher than in any of the previously recorded breeding seasons. This is particularly true in the case of sandwich terns, which still continue to increase in number. We are expecting an even more successful breeding season next year. We firmly believe that port development and environmental protection can go hand in hand. It is this harmony that we strive for,’ concluded Anna Drozd, spokesperson for the Port of Gdańsk.

Port of Gdańsk at the 9th International Transport and Logistics...

Port of Gdańsk continues working with the “Portowiec” football club