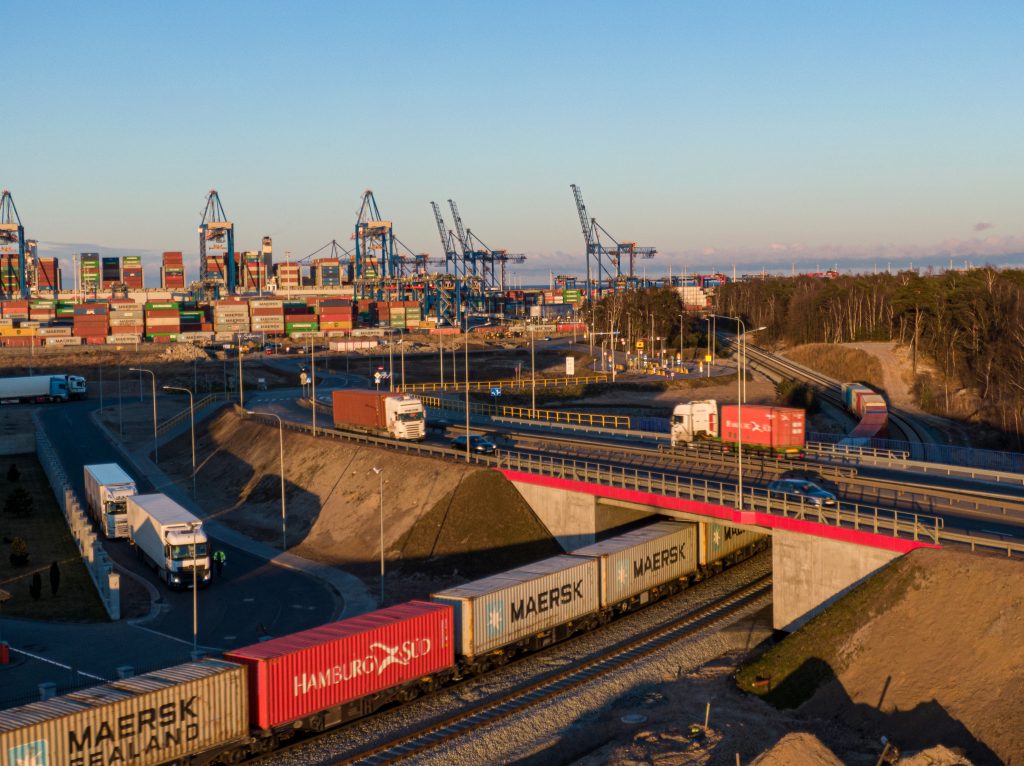 10 km of roads, 7 km of tracks, 14 railroad switches, 7 engineering structures, including road viaducts and protective culverts on the PERN and LOTOS fuel pipelines, a buffer car park for trucks – a key investment project of the Port of Gdańsk Authority SA with a total net value of PLN 166 million, is being completed. All that is left for the general contractor, the Sopot-based NDI company, is cleanup. Acceptance works are currently underway. On Wednesday (March 17) afternoon, the first trucks travelled over the target road system on Kontenerowa Street.
Its cross-section now consists of two roadways with two lanes each.

“This is a huge undertaking of key importance for the Port of Gdańsk. We have implemented this project with our current and future customers in mind so that their reloading processes are as efficient as possible. It is about the construction of new roads and track systems leading from the PKP Port Północy railway station to the gates of individual terminals. In the case of the largest of them, i.e. the DCT terminal, there will be two dedicated tracks. Besides this, the road project will output collision-free traffic from the terminal, further to the south of Poland. Importantly, it is a completely new road system that will enable collision-free vehicle traffic, which is extremely important with such a large volume of freight traffic. Two dedicated 2 plus 2 roadways to the container terminal will ensure the container exit’s compliance with the highest European standards. The only place from the exit from the terminal where the traffic will have to slow down is the highway gates. Our project fits perfectly into projects implemented by the General Directorate for National Roads and Motorways, which are coordinated at the government level by the Ministry of Infrastructure. The A1 motorway linking the Czech Republic with the Polish coast of the Baltic Sea and the Port of Gdańsk is already 85% complete. In 2022, we will be able to travel directly and without traffic lights from the Port of Gdańsk to Ostrava in the Czechia, Brno, Prague, and Slovak Bratislava”, comments Łukasz Greinke, President of Port of Gdańsk Authority SA.

The works at the Port of Gdańsk started in August 2018, and according to the contract, they are expected to end in May 2021. For all of that time, the general contractor, with the port and all reloading bases fully operational, carried out subsequent stages of the works.

“The biggest challenge in this project was logistics”, says Maciej Szymański, NDI site manager. “On many occasions, the work was carried out 24 hours a day to, for example, restore train traffic to the DCT terminal as soon as possible. We carried out the works in almost all disciplines and we always had to maintain the port’s ability to operate normally. This was possible thanks to the excellent cooperation with the Investor, i.e. Port of Gdańsk Authority SA, and the Contract Engineer, SWECO”, adds Maciej Szymański.

The main construction works were completed last year. The last few months have been for finishing works and paving works on Kontenerowa Street. At the Port of Gdańsk construction site, the builders used 40,000 tons of bituminous mass, 13,000 m3 of structural concrete, 860 tons of reinforcing steel, and 1,200 tons of rails.

“This project is not only beneficial to the DCT container terminal, the largest in this region of the Baltic Sea, but also due to its enormous scope for the entire Outer Port area, which is responsible for the majority of reloading in the Gdańsk port. This project is part of the largest capital expenditure program at the Port of Gdańsk since the late 1970s, as it is valued at over PLN 750 million (EUR 163 million). And yet, the Port of Gdańsk is not slowing down and there are plans for further upgrades and development of quays, as well as road and rail infrastructure, for over PLN 1 billion (EUR 217 million) of capital expenditure on port infrastructure”, says Lech Paszkowski, Director of the Development and Investment Department of Port of Gdańsk Authority SA.

Within the framework of the Outer Port’s road and rail system expansion project implemented by NDI for Port of Gdańsk Authority SA, the streets Portowa, Poinca, Kontenerowa, and Budowniczych Portu Północnego have been rebuilt. Four new viaducts have been erected, and two existing ones dismantled (including one over operable railway tracks and the other over the PERN, LOTOS, and Naftoport fuel pipeline complex). A new track to the DCT terminal has been added, as well as new tracks to coal terminals, and a modern railway traffic control system. Also, a buffer car park for trucks, the first in this part of the port, has been built.