The Port of Gdańsk with most cargo handled in history – 53.2 million tonnes 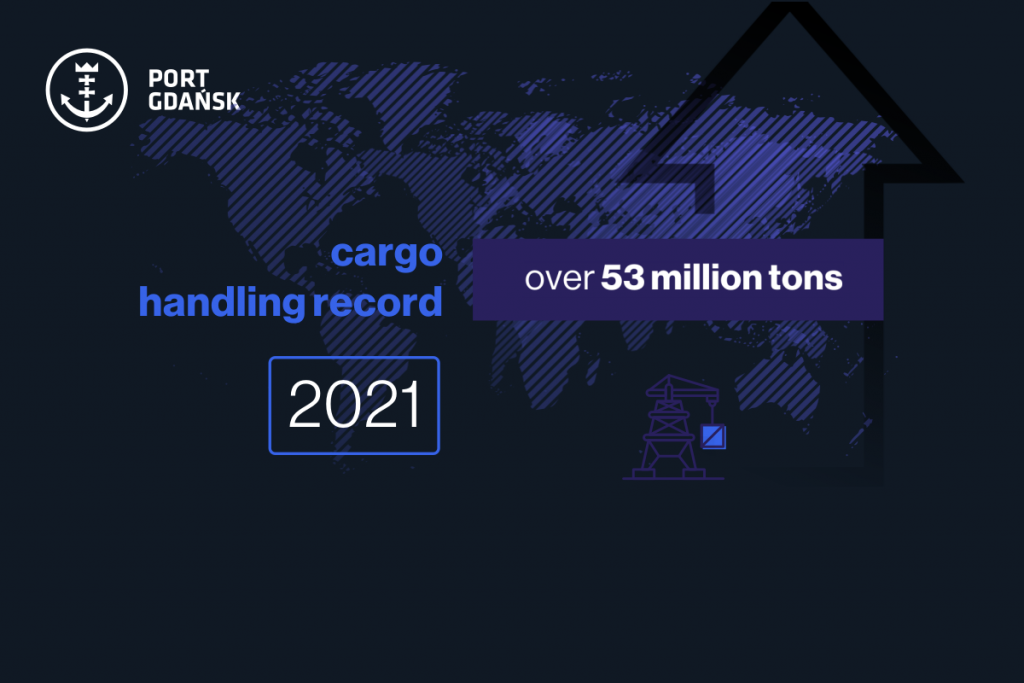 On 17 January, the Ministry of Infrastructure hosted a conference summarising the year 2021 in Polish sea ports. It was attended by Ministers Marek Gróbarczyk and Grzegorz Witkowski, and the management boards of the three largest Polish ports: Gdańsk, the Szczecin-Świnoujście port complex and Gdynia. In the Port of Gdańsk, 53.2 million tonnes of goods was handled in 2021, which represents an 11% increase, and is the most cargo handled in the history of the Port of Gdańsk.

In his opening speech, Marek Gróbarczyk, Secretary of State at the Ministry of Infrastructure, Government Plenipotentiary for Water Management and Investments in Maritime and Water Management, stressed that such a good result has never been achieved before in the case of cargo handling in Polish ports.

“This shows the strong position of our ports. This record result is proof that we have coped with the effects of the pandemic very well Let us not forget that the pandemic is still ongoing and many economies are continuing to suffer.

What about us? In terms of the economics of port development, in terms of exports, imports and, above all, the opening up of freight, we can boast a 9% increase year-on-year. 113 million tonnes clearly places us at a very high level in terms of cargo handling at ports. If we take a historical perspective, we can see enormous growth dynamics. From 2008 to the present day, we have had a 116% increase in cargo handling.”

The Deputy Minister also pointed to the fact that until 2008, we were not included in the rankings for container handling. And today we can boast of over 3 million TEU of containers handled.

“It is a huge success. The DCT terminal in Gdansk is currently the largest container port on the Baltic Sea. I am convinced that the ongoing investments in port infrastructure worth nearly PLN 7 billion will bring further growth in the coming years. We cannot stop here, we are striving to increase the amount of cargo handled and build a huge hub, first of all by associating all of the alliances that were previously located outside of Poland, so that the largest container ships arrive here ”, said the deputy minister.

Grzegorz Witkowski, undersecretary of state in the Ministry of Infrastructure, added that investments in infrastructure, and thus the results of individual ports, prove that the effect of synergy was achieved.

“We all wanted to achieve the same result. We will not spare funds for maritime economy, because every penny invested in ports, shipyards, and infrastructure returns a hundredfold. These results are the best example.”

Record-breaking cargo handling in the Port of Gdańsk

Compared to the previous year, this represents an 11% increase.

“This is the best result in our history We managed to beat the record from 2019, in which we handled 52 million tonnes”, emphasised Łukasz Greinke, CEO of the Port of Gdańsk at the conference. 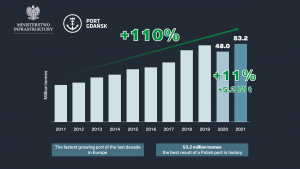 The Port of Gdańsk is the fastest growing port in Europe in the last decade, with a growth rate of 110%.

“But if we compare the current result to that of 2016, the year in which we took the decision to make large investments – in the access infrastructure to deep-water terminals, in the reconstruction of the waterway and in the modernisation of almost 5 km of quays in the Inner Port – we can see that it was in that period that the dynamics was the highest – an increase of almost 16 million tonnes of goods”, adds President Greinke. 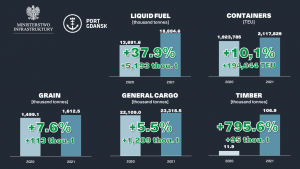 The record-breaking result of 2021 was due to, among others, the handling of liquid fuels – 18.8 million tonnes with a growth rate of 37.9%. (over 5 million tonnes more than in 2020). This is an absolute record for Naftoport – nearly 18 million tonnes. An increase of 10% was recorded by containers. Cargo handled at the DCT terminal reached 2.1 million TEUs. Even better results are expected soon – due to the construction of Baltic Hub 3 and the expansion of facilities at the T2 terminal.

Grains recorded a 7.6% increase – grain handling reached nearly 1.6 million tonnes. There was a 5.5% increase in general cargo handling, including containerised cargo – total cargo handling of this cargo group reached 23.3 million tonnes. The highest growth was recorded in timber, which increased by as much as 795%. This is a cargo group that appears in the Port of Gdansk depending on the economic situation on the local market. 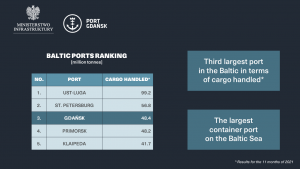 “It should be emphasised that we managed to achieve this record during the investment process. The port never sleeps. Although the investments were in full swing, the operators carried out their handling. The result we achieved last year pleases us, but it does not satisfy us. We have high aspirations, we want to be one of the biggest ports in Europe and we are interested in a place in the top ten. So far, we have moved up to 18th position in Europe, we are still on the Baltic podium – we are 3rd in total cargo handling. I am convinced that our further investments, which we will be implementing very soon, will bring the Port of Gdańsk to new volumes.

Within two to three years, instead of five at the front, we will have six, and in the next five years – seven’, assures Greinke.

Port of Gdansk Authority SA awarded the Golden Statuette of...