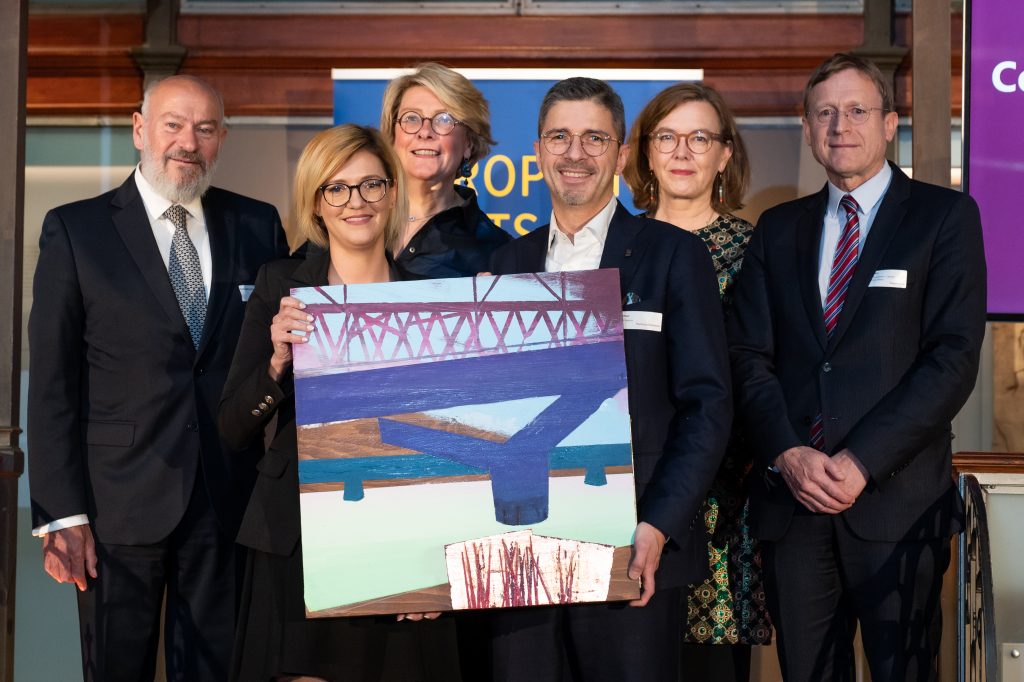 For the first time in its history, the Port of Gdansk has won the ESPO 2021 award for its commitment to social inclusion and aid to those in need during the pandemic.

On behalf of the Port of Gdańsk Authority SA, the award was received by Piotr Bura, Director of the Marketing and Communications Department and Anna Drozd, spokeswoman. The competition was concluded and the winner announced on 9 November in Brussels, during the traditional ESPO Awards Ceremony.

This was the 13th edition of the competition organised by ESPO (European Sea Ports Organisation). This year’s theme was “The role of ports in the reconstruction of the city and local community”. In this area, the Port of Gdańsk has much to be proud of. Over the past year, ZMPG SA has implemented several projects to improve the quality of life for residents of districts organically linked to the port, namely Stogi and Nowy Port.

“We feel part of this community, so we want to be closer to the residents and support their initiatives. We provide assistance in various areas, such as ecology, sport, health, education”, says Piotr Bura, Director of the Marketing and Communications Department.

And what specifically has the Port done for the local community?

“We support local football clubs, such as “Gdańsk” and “Torus Wybrzeże”. During the summer holiday period, we organise Summer Cinema on the beach in the district of Stogi. We provide financing for interesting local initiatives such as the Community Library of the “Friendly Pomerania” Association, operating in the district of Stogi. We have been involved in pandemic-related activities for almost a whole year. We support paramedics from Pomerania, but we also help the elderly and this sick from the districts of Nowy Port and Stogi, often providing them with their only hot meal of the day. We have donated 4 analysers for SARS-CoV-2 infection diagnosis, personal protective equipment and tourist fridges to Pomeranian hospitals. We have also purchased 10 fully-equipped tents that can serve as temporary reception rooms, if necessary”, says Anna Drozd, spokeswoman for the Port of Gdansk.

After this presentation, an independent jury composed of international experts, chaired by Dimitrios Theologitis, former head of the Ports and Inland Navigation team at DG MOVE in the European Commission, had no more doubts. The Port of Gdansk was recognised for its significant role in the recovery from the Coronavirus pandemic and contribution to the improvement of the local community and the region. Thus, the Port of Gdansk was better than 10 projects from all over Europe taking part in the competition. There were four ports in the forefront. Apart from Gdańsk, these are: Hamburg (Germany), Valencia (Spain) and Vigo (Spain).

“The award further reinforces our belief that good comes back once we open ourselves up to other people. Since the beginning of the pandemic, we have been supporting people on the front line of the fight against the coronavirus: paramedics throughout Pomerania, seniors and sports initiatives for children. The time of the pandemic has released a huge amount of energy and empathy and a sense of solidarity, so necessary at this time. We are showing that solidarity with others, building good relationships, cooperation and responding to the needs of our neighbours “from across the fence” are values that can make the world a better place. The award motivates us to take further action in the future”, says Łukasz Greinke, President of the Port of Gdańsk.

The ESPO Award was established in 2009 to promote innovative port projects improving the social integration of ports with cities or wider local communities. In this way, the award aims to stimulate the sustainable development of European ports and the cities in which they operate.

The Port of Gdańsk with most cargo handled in history...

Deepwater – a new investment area at the Port of...