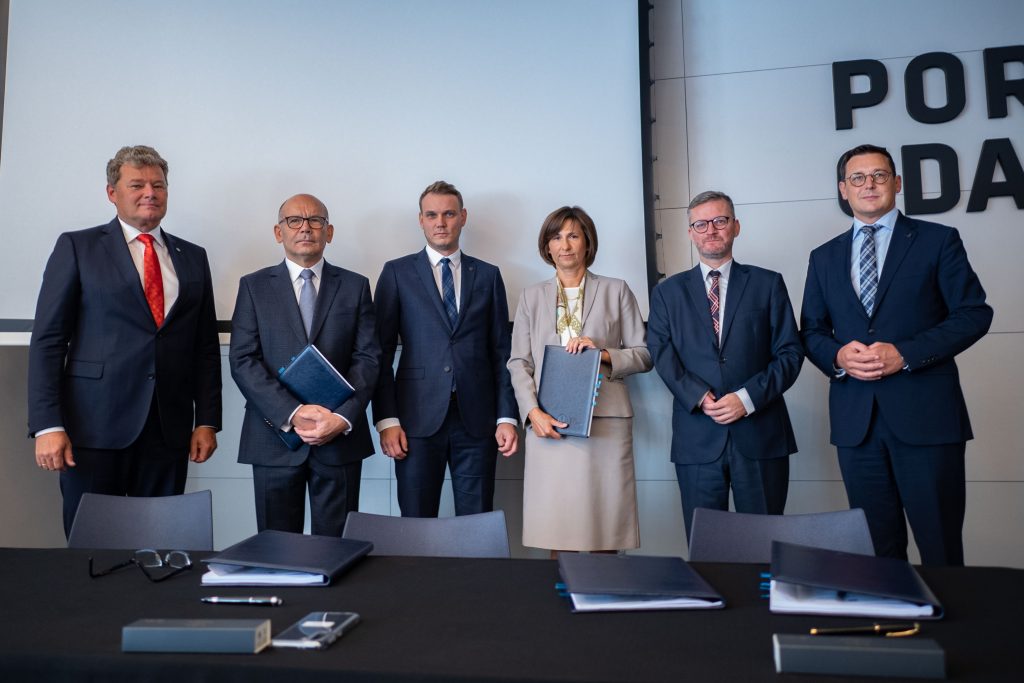 Following the completion of a multi-million project aimed at expanding the road and rail network within the Outer Port, another investment project is about to start, this time related to the modernisation of the road and rail system in the area of the Przemysłowe Quay at the Inner Port. The value of the investment is 80 million PLN. The contract was signed in the presence of Grzegorz Witkowski, Deputy Minister of Infrastructure.

The Port of Gdańsk, by extending the access infrastructure from the land, raises service standards, increases competitiveness and strengthens its position in the Baltic Sea. Reconstruction of the Przemysłowe Quay area will begin soon. The investment is part of the project “Expansion and modernisation of core network nodes concerning road and rail infrastructure”.

Grzegorz Witkowski, Deputy Minister of Infrastructure, present during the event, argued that every token sum invested in Polish ports pays for itself a hundredfold.

“I could only wish that we signed similar contracts on a monthly basis, because every access to and every improvement in the port translates into an increase in both loading and unloading operations and competitiveness. We will not go astray. We are going to continue with investing in Polish ports. Especially since the competition never sleeps. When we took over the national government, a real host for the Polish coast and ports entered the stage. What we are witnessing now is gigantic investment momentum. We are sparing no funds on the expansion of Polish ports. Be it western or eastern ports, everybody looks with envy at what is happening in our country”, said Grzegorz Witkowski, Deputy Minister of Infrastructure, during the conference.

The project covers the reconstruction of the railway and road system between the Przemysłowe Quay and Ku Ujściu street and between Chemików street and the abutment of the ferry crossing along Bosmańska street through the Kaszubski Canal.

The contract between ZMPG S.A. and the general contractor, the Sopot-based company NDI, was signed on September 3 at the Northern Port Harbour Master’s Office in Gdańsk. The project is co-financed under the “Connecting Europe Facility”.

“Once we complete the road and rail investment at the Outer Port, we are starting another project, this time located within the Inner Port. We want to be the number one port on the Baltic Sea in terms of total cargo handling. The infrastructure investments that we are currently implementing are the key to increasing such operations. The investment we are announcing today will undoubtedly boost the potential and handling capacity of our port. All operations will be smoother and the security will improve”, explains Łukasz Greinke, President of the Port of Gdańsk.

“We are very happy to be back to the Port of Gdańsk”, says Małgorzata Winiarek-Gajewska, President of NDI. “We already have experience in cooperation with ZMPG S.A., which our staff will exploit in the upcoming project.”

“The contract signing and the commencement of the Contract Engineer service for the project, important as it is for the Port of Gdańsk, is a source of great satisfaction for us. We are glad to be part of the undertaking, all the more so as it is the second assignment that we will manage and supervise under a contract with the Port of Gdańsk Authority. Last May we completed the task related to the expansion and modernisation of the road and rail network at the Outer Port in Gdańsk, as part of which we also provided investor supervision and management services”, says Waldemar Lechnik, Investor Supervision Director, representative of the Contract Engineer, Sweco Polska sp. z o.o.

As part of the investment project, water supply, sanitary, power engineering and telecommunication systems will also be rebuilt. A rainwater drainage system, street lighting, a new fence for the property and two guard posts will be constructed as well. The total value of the investment is 80 million PLN. The works will last until the end of April 2023.