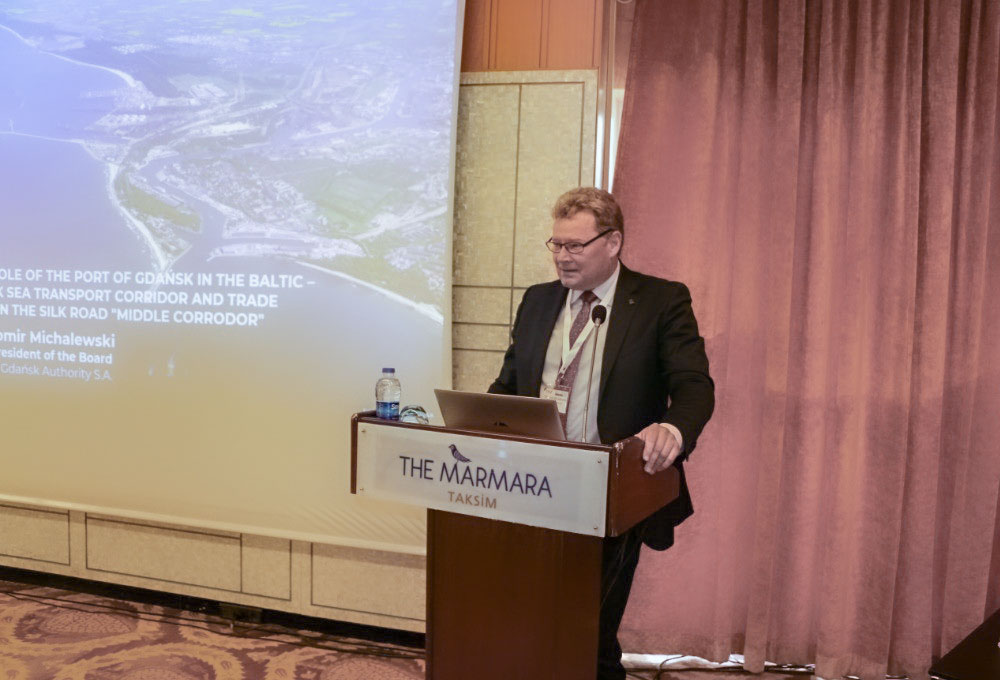 Between the 6th and the 8th of July 2021, a delegation from Port of Gdańsk Authority SA led by Vice-president Sławomir Michalewski, attended the 9th Black Sea Ports and Shipping 2021 Istanbul conference.

The representatives from Port of Gdańsk Authority SA attended the conference in another stage of work on establishing a multi-modal transport corridor from the Black Sea to the Port of Gdańsk. The conference was attended by port management authorities, terminal operators, logistic companies, ships’ agents, terminal outfitting manufacturers, and the representatives of a Polish rail transport carrier, PKP LHS (operating on wide-gauge rail lines) who may have a key role in the railway component of this new transport corridor.

The conference was attended by the representatives of Marport, one of the region’s largest sea terminals. Marport operates a 2 million TEU terminal capable of serving ships up to 24,000 TEU and handling feeder links to Ukrainian sea ports. The location of Marport, not unlike the other largest Turkish sea ports on the cost of the Sea of Marmara, allows it to handle the largest container ships. Marport is a hub and a transhipment port for the cargo crossing the Black Sea.

A part of the conference agenda was a study visit to Gemport, a sea terminal at the Sea of Marmara, owned by YILPORT Holding of Turkey. YILPORT Holding plans to be ranked in the top 10 of world’s largest container terminals by 2025.

It was key for the delegation from Port of Gdańsk Authority SA to exchange experience in sea port management and meet with shipping forwarders who directly handle cargo from the Black Sea states to Poland, Scandinavia, and other countries. The preliminary information disclosed by the forwarders suggests that the size of cargo exchange between Turkey, Scandinavia, and Poland is approximately 200,000 TEU a year.

“The plan for the new transport route between the Black Sea and the Baltic Sea through Ukraine demands the proactive participation of Turkey. It is then essential to build relations and seek business opportunities. The economy of Turkey is the strongest one in the Middle Corridor of the southern part of the Silk Road, and one of the largest automotive sectors in Europe”, says Sławomir Michalewski, Vice-President Finance of Port of Gdańsk Authority SA. A proof of the high interest in Turkey is the significant representation of the Mediterranean Shipping sector at the conference, which included Port Barcelona, Italian consulting companies, Freeport Malta, and Port Rijeka of Croatia, complemented by delegations from German and British corporations, and Port Aktau of Kazakhstan. The attending representatives of various sectors and industries stressed the need for a concrete market portfolio while expressing interest in becoming stakeholders in the launch of the new Baltic-Black Sea transport corridor.

On 13 October 2020, Port of Gdańsk Authority SA and the Sea Port Administration of Ukraine signed a letter of intent in Odessa concerning cooperation of the two bodies; as a result, a task group was established which is now developing the concept and foredesign of the new intermodal transport corridor to link the Black Sea ports in Ukraine with the largest Polish sea port in Gdańsk. In a broader perspective, the new corridor will streamline the transport of goods from the Middle East and Turkey via Ukraine and Poland to destinations across Central Europe, Scandinavia, and the United Kingdom. It will also facilitate the export of Ukrainian products to the EU. Lastly, Chinese goods will be carried through the southern part of the corridor, bypassing Russia.