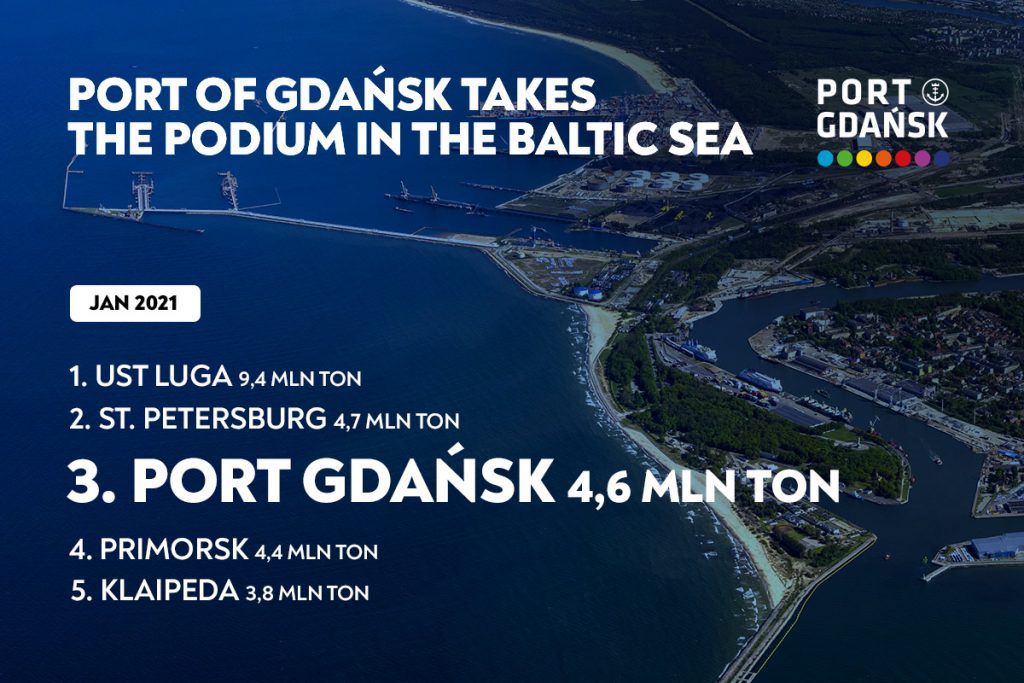 A consistent trend for at least a decade has been the presence of three Russian ports on the Baltic podium (Port of Ust Luga, Port of St Petersburg and Port of Primorsk). January 2021 saw the first change in the balance of power in the Baltic. The Port of Gdańsk Authority S.A. moved up to third place with 4.6 million tons of cargo handled, an increase of 8.8% compared to January 2020.

“The rise of the Port of Gdańsk Authority S.A. to third place not only proves the great flexibility of our port and, consequently, of our operators, but it also shows its universal character in the context of other ports in the Baltic Sea region. The global pandemic has affected the entire maritime industry. It has also been an important test for Polish ports, one which we managed to pass,” commented Adam Kłos, Commercial Director of Port of Gdańsk Authority S.A.

The Port of Gdańsk Authority’s share in handling Polish maritime cargo exchange remains high, and in 2020 reached 46.2%, the highest of all Polish ports. The global pandemic did not prevent the Port of Gdańsk Authority S.A. from maintaining its high position in the rankings. It was the fastest growing of all European ports during the period of prosperity, and then experienced some of the smaller declines when the pandemic hit all ports.

“It is definitely a good start to the year for the Port of Gdańsk Authority S.A.. The credit for this goes to the hard work of our operators. We are thoroughly impressed with their dedication. Our goal is to continually strengthen our position in the Baltic Sea. Thanks to our investments and clear directions, our contractors see an increase in their cargo handling capacity, while the Port of Gdańsk Authority S.A. grows in strength. We are already a port without limits. This is due to: a deep-water fairway, thanks to which the External Port can accommodate the largest vessels with draughts of up to 15 metres; the absence of tides, giving a constant water depth; and the lack of ice, which enables year-round operation. In addition we are nearing completion of our key investments on both land and water. Real improvements in terms of infrastructure in the Inner Harbour will be visible from the middle of this year, when all the quays will be upgraded and the fairway deepened to 12 m. Operators will be able to use the new infrastructure, which will constitute yet another opportunity for them to increase their handling capacity,” claimed Łukasz Greinke, CEO of the Port of Gdańsk Authority S.A.