Agreement between Gdansk University of Technology and the Port Gdansk 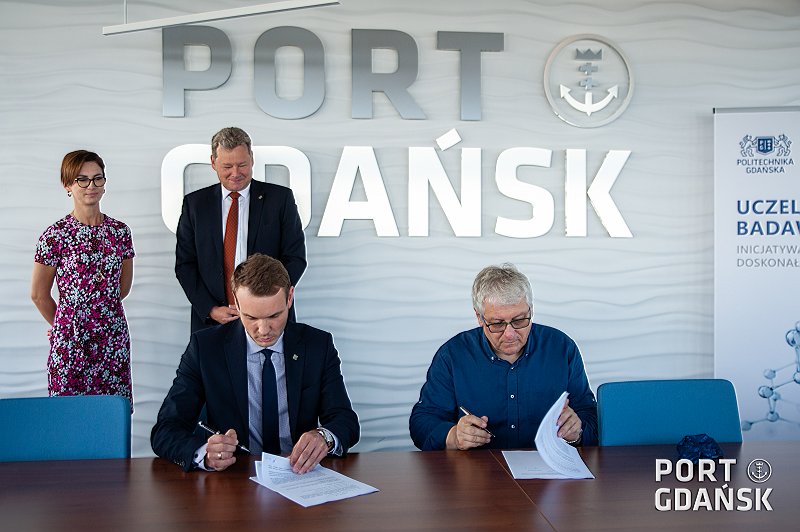 On Thursday, August 13, at the Northern Port Master’s Office, an agreement was signed between Gdansk University of Technology and the Port of Gdansk Authority, with the aim of pilot implementation of Internet of Things (loT) systems in order to improve efficiency and safety at the Port of Gdansk.

"One of the important elements that led to concluding the agreement and the de facto commencement of pilot implementations of new Internet of Things systems at the port in Gdansk are the activities launched by the Office of the Marshal of the Pomorskie Voivodeship (UMWP). During the competitive selection of Pomorskie Smart Specialisations (ISP), in 2013 the UMWP launched an active entrepreneurial discovery process, involving the cooperation of various partners from the region, representatives from the world of business and science, business environment institutions and non-governmental organisations, including ZPMG S.A. and the Faculty of Electronics, Telecommunications and Informatics (ETI) at Gdansk University of Technology (GUT)," says dr hab. inż. Lukasz Kulas, associate professor at GUT.

The planned implementations assume the provision of a number of loT solutions at a high level of technological readiness, the creation of solutions based on data processing, using artificial intelligence (AI) mechanisms, and also the development of safe and reliable solutions for industry, with particular emphasis on wireless communication and cyber resilience. It is also about the creation of an appropriate technological structure with particular focus on wireless communication and cyber resilience, as well as that of a technological structure to allow the development of component-based IoT/AI systems.

"By analysing the data collected by devices of Gdansk University of Technology, and reviewing the resulting multi-level analytical reports prepared by GUT scientists, we will be better able to manage our assets. Optimising the operation and use of the machinery and equipment involved in cargo handling will ultimately translate into the improved market attractiveness and competitiveness of the entities carrying out such handling operations. Concepts such as the Internet of Things, Digital Twin and Condition-Based Maintenance (CBM) are an integral part of Industry 4.0. The fact that for several years machines have been able to talk to each other digitally and transmit operational data now bring us to a reality only previously known from SF books and stories. Having current information on typical traffic routes for wheeled equipment within a given reloading area, as well as data on the use of different equipment on a daily, weekly or monthly basis, should help in assessing the purchasing strategies or maintenance costs. Such data resources also bring a number of benefits for those managing the task allocation of equipment resources. Also we cannot ignore the safety aspects, insurance costs or the benefits of predicting and preventing equipment failures based on the readings of sensors that measure the operating parameters of individual devices," adds Slawomir Michalewski, Vice President of the Port of Gdansk Authority.

The proposed concept fits squarely within the current trends in building the advantages of port areas through the use of digital technologies.

"One of the key advantages of Gdansk University of Technology, especially in the context of its recently-obtained status of National Research University, is the proximity to the sea and key Polish entities that have established lasting ties with the maritime economy. After nearly two years of preparations and close work with employees of ZPMG S.A., we have managed to include the area of the Port of Gdansk into one of the largest European IoT projects, i.e. "InSecTT" (Intelligent Secure Trustable Things), which will allow us to finance our previous plans," notes prof. dr hab. inż. Jerzy Wtorek, Dean of the ETI Faculty of GUT.

Port of Gdansk and the Rzeczpospolita Eagle Award

The Port of Gdansk has advanced to the group of...