An investment at the Port of Gdansk nearing completion 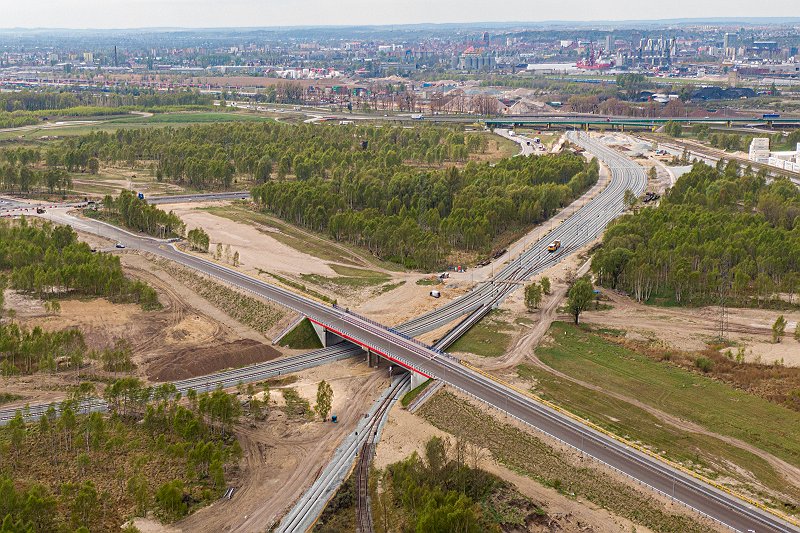 85% of the work has already been executed. The NDI company will complete work on the redevelopment of the road and railway system at the Port of Gdansk. The ongoing work will result in 5.6 km of new roads, 16 junctions, 4 flyovers, and a buffer car park for heavy goods vehicles.
An additional railway track leading to the DCT terminal has already been completed, along with new tracks leading to the coal terminals, and a modern railway traffic control system.

The last land reinforcements, consisting in placing CFA piles in the ramp leading to the WD-4 facility, have been completed, and earthwork is still in progress there. After completing the road surface work on the new roadway of Kontenerowa street, the contractor, NDI, is preparing to switch the traffic and redevelop the existing roadway. It will be the last stage of the works. The construction of the WD-2 flyover, along with the ramps, has been completed. 95% of network work within the main collector sewers for rainwater has been executed and the redevelopment of the last sections of streets located within the port, that is Budowniczych Portu Polnocnego (right lane), mjr. H. Sucharskiego, and kpt. W. Poinca streets, has started.

Some rather impressive and interesting work is under way at Portowa street, where a car park with a concrete surface for heavy goods vehicles is being constructed.
“We are at the stage of preparing the 27 cm thick concrete surfaces,” says Maciej Szymanski, construction site manager, NDI. “The car park has a surface area of 15,000 square metres and its volume is 4,700 cubic metres of class C40/50 high strength concrete. Due to the investor’s high strength and quality requirements, we had to adjust the method of laying the concrete mix using the sliding method. The method consists in the use of a machine which can lay the concrete, thicken it, vibrate the dowel bars and anchors, and float the concrete – all during one cycle. The machine performs four actions at the same time, which, if performed manually, would require about 30-40 workers and we would not be sure whether the surface would have the required quality,” adds Maciej Szymanski.

“We are happy with the progress of the work and very pleased that we are nearing completion of such an important undertaking. The investment currently under way will streamline road and railway traffic within the part of the road system used to get to external terminals, primarily the DCT, Sea-Invest, and Gaspol terminals,” says Lukasz Greinke, President of the Port of Gdansk Authority.

The method used by NDI also finds application in the construction of both airports and motorways. It allows us to obtain the required degree of thickness across the entire cross section of the surface, 27 cm in this specific case.
The machine used here makes it possible to prepare up to 15,000-20,000 square metres of surface a month, which amounts to 150,000 square metres per year, taking into consideration adverse weather conditions.

As part of the road and railway network expansion project at the Outer Port, executed by NDI for the Port of Gdansk, the following streets will be converted: Portowa, Poinca, Kontenerowa, and Budowniczych Portu Polnocnego, with the total length of 5.6 km. Four new flyovers are under construction and two existing ones will be demolished (including one over railway tracks in operation and one over PERN, LOTOS, and Naftoport fuel pipelines). Another railway track leading to the DCT terminal will be added, along with new tracks leading to the coal terminals, and a modern railway traffic control system will be implemented. The first buffer car park for heavy goods vehicles in this part of the port will also be built. The investment, worth ca. PLN 170 million, is being executed by the NDI company from Sopot.

The author of the publication shall be solely responsible for its content. The European Union shall not be liable for any use of the information contained in the publication.